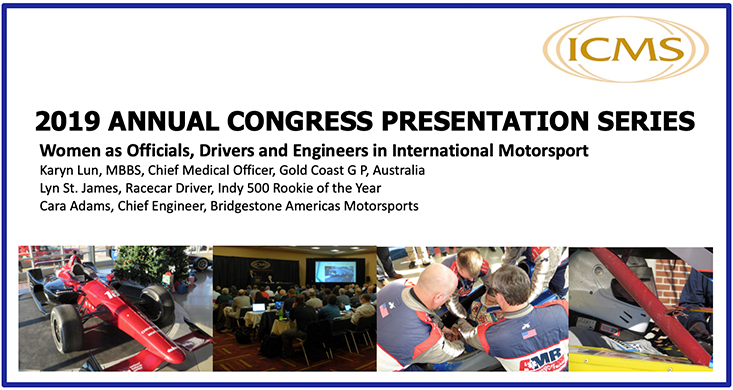 Stay tuned as a new presentation is uploaded each week. Click here to hear the audio and view the PowerPoint file for this Presentation.

Lyn St. James
Ms. St. James was named one of the “Top 100 Female Athletes of the Century” by Sports Illustrated, Lyn has set 21 national and international speed records. As a competitor in the world’s largest sporting event – the Indianapolis 500 – St. James earned Rookie of the Year honors in 1992 and competed in 15 IndyCar races, including seven Indy 500’s. She has competed all over the world, including the 24 Hours of LeMans twice (1989 and 1991) with victories in the IMSA Series at Watkins Glen, Road America, Daytona, and Sebring.

Cara Adams
Ms. Adams graduated from the University of Akron with a Bachelor of Science in Mechanical Engineering and a Bachelor of Arts in Spanish. She was appointed as Director of Race Tire Engineering and Manufacturing in October 2019. Previously, she was Firestone Racing’s Chief Engineer and Manager of Race Tire Development. She has more than a decade of racing experience after joining the Race Tire Engineering team at Bridgestone Americas Tire Operations. She has developed tires for road/street courses and the Indianapolis 500 Mile Race.