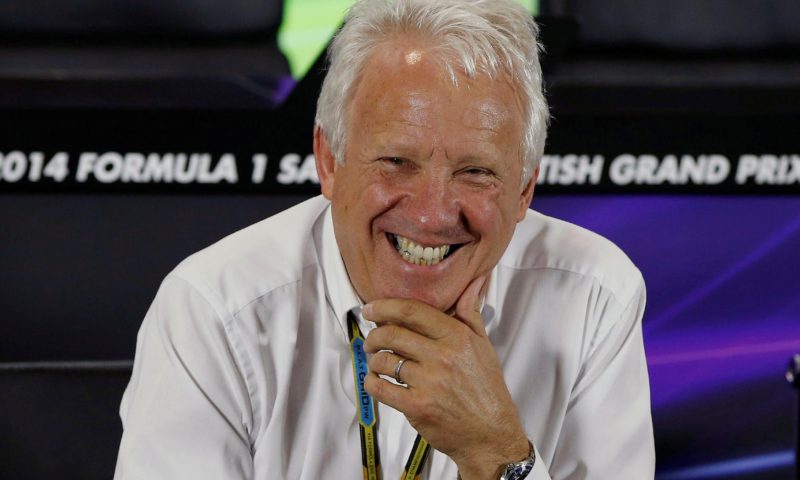 The International Council of Motorsports Sciences extends its deep condolences to the family and friends of Charlie Whiting (1952-2019). We are all in a state of shock and deeply saddened by the sudden loss of this iconic member of the motorsports family.

The entire world of motorsport was shocked and saddened to learn of the sudden death of the iconic Charlie Whiting of a pulmonary embolus the day before the first Formula One race of 2019. Charlie devoted his entire adult life to all aspects of motorsport. He was a mechanic with the Hesketh Team in 1977. He joined the Brabham Team owned by Bernie Ecclestone in 1978, working his way up to becoming Chief Mechanic, being instrumental in Nelson Piquet winning F-1 World Championships. When Bernie became involved in his phenomenally successful promotion of Formula One, Charlie was appointed FIA Technical Delegate in 1988, becoming ever more involved in the technical and safety aspects of motorsport.Recognizing his great knowledge and experience, and his dependable poise and calm under pressure, he was appointed F-1 Race Director, Safety Delegate and Permanent Race Starter in 1997. Over the next 22 years, Charlie earned the respect and admiration of drivers, constructors, team owners, race promoters, circuit builders, the international race media, race rescue and medical teams and organizations and national and international motorsport organizations.I first met Charlie in 1978 when he was a mechanic with Brabham {together with Herbie Blash and Alan Woollard} and we became comfortable friends over the past 40 years. In my many travels with my great friend, Professor Sid Watkins, we often had conversations with Charlie about medical and safety aspects of motorsport… particularly F-1. He was a determined supporter of reinforced tubs, wheel tethers, the HANS device, head surround protection and the HALO. He was a consistent participant in the deliberations of the joint engineering / medical discussions of the FIA International Institute for Motor Sport Safety in Paris from 2007 through 2017. At the ICMS in 2015, he generously accepted our invitation to be a special speaker at our Annual General Meeting in Indianapolis. Charlie was aware of the volatile politics in Formula One, but his was a constant voice of calm and reason. He was an iconic and charismatic ambassador for all of motorsport. He will be missed by all.

We have tragically lost a truly remarkable icon within our sport.  Charlie Whiting has touched every aspect of our sport in some lasting way.  He was a resource to many, a mentor to some, and a friend to everyone who knew him at all well.  Always calm, but firm when necessary, he handled many of the most difficult situations our sport can manufacture.  He shared the knowledge he had amassed through the years he served as a chief mechanic on the team he began his career with through the many years within the FIA as basically the last word in Formula 1. If there was a difficult problem to be solved, he was front and center.

The safety and wellbeing of us all was his prime motivation. He could dress you down without offending or humiliating you and he could bolster you when you were not at your best. He was amenable to change if it was for the better of all and he fought anything that was unfair or detrimental in any way.  A man like Charlie comes along only rarely, usually when the world needs them the most. His ability, humor, fairness, honesty, strength, and vision will be truly missed by those of us who made contact with him as we played whatever roll we had acquired.  For those of you who were yet to meet him you don’t know it, but you had already been touched by his presence.  Charlie, the racing world is unanimous in wishing you God Speed!

Charlie Whiting earned his status naturally by virtue of his many achievements and the roles that he played in motorsports, as well as by his interactions with others on a daily basis. Despite being an incredibly busy person charged with a great deal of responsibility, he was humble and very approachable.  Many other positive personal traits and attributes as evidenced by the way that he treated others readily spring forth when describing him including integrity, sincerity, dignity, respectfulness, efficiency, honesty.  On a personal note, of the roughly 4,000 email contacts that I have in my address book, there is no question that Charlie Whiting would win in two categories – most rapid response and most concise yet friendly response.

Through the combination of his intellect, common sense, and powers of observation, his many years in motorsports made him an immense source of knowledge and wisdom. Many of us were able to experience this first hand in candid conversation with him about the management of a racing incident.  As mentioned in the tribute written by Beaux Barfield, beneficiaries of Charlie Whiting’s deep understanding of motorsports and common sense extended beyond Formula One to other racing series and to those for whom he conducted track inspections.  Collectively, the ICMS benefited from his depth of knowledge and experience when we were honored by his presentation at our 2015 Annual Congress.

The outpouring of tributes to Charlie Whiting serve as evidence that he made many significant contributions to the motorsports safety and the evolution of the governance of the sport.  His impacts were both global and individual.  Charlie Whiting was charismatic person who will be revered and celebrated in our memories and greatly missed by all.

I first met Charlie Whiting at one of the early meetings of the Expert Advisory Group in 2000, when I was invited to join the group by Professor Sid Watkins. During the interval from 2000 – until 2005 I attended the meetings of that group and its successor the FIA Institute for Motor Sport Safety and Sustainability. During that period, I was privileged to know and work with Charlie. He was a kind, intuitive and respectful. He always seemed to be well informed, in command of the facts, which he processed with clarity and rapidity before voicing his opinion. In my interactions with him he was very insightful and seldom incorrect in his assessments.

The most memorable occasion that I can recall was his appearance at the Safety Truck that I was riding in at a CART race in Denver. That was in 2002. This was the event that ran on the temporary street circuit near the Pepsi Center. I glanced in the rear-view side mirror and saw him walk behind our truck. He was looking at the run off and the tire barriers placed there as he was walking up to the passenger side of our truck.

I was a bit taken aback that he was at a CART Race in the States and never did get a straight answer to my question of “what are you doing here?” We chatted for a while and something occurred on the track that drew my attention. When I looked back to where he had been standing, he had vanished.  With his shock of nearly snow-white hair and his habit of appearing where least expected without any to do, I took to calling him the “grey ghost”. He was everywhere appearing and disappearing like an apparition.

Charlie was one of a kind and will leave a post that I doubt will ever be filled by a single person. It saddens me personally that I’ll not seem him again. Motorsports has lost a true champion that was always on to his next task and subsequent victory in the field of driver safety and protection. Rest in Peace Charlie!

From Paul Trafford, M.D.
I first met Charlie Whiting in 1991 after I had been appointed to oversee the British Touring Car Championship and needed to discuss some safety issues, I felt were important. I was told to talk to Charlie and to my surprise he not only met with me and listened, he actually took an interest and was very helpful. Since then he has proved to be a good ally in all matters relating to medical issues, safety and research in all forms of motorsport and for that I will always be immensely grateful.
Charlie as everyone knew him was respected by everyone but was also known by many of the doctors involved around the world, giving his time and making them feel at ease with his instantly recognisable disarming smile, sense of humour and relaxed approach. He was however one of the giants within the FIA and F1, a world where respect has to be earned and one of the most knowledgeable out there. He worked his way up over 50 years, from mechanic to Race Director. He started every F1 race for over 25 years, sitting in overall control and saw massive changes and safety issues introduced.
Charlie spent his life travelling and not just to F1 events, he represented the FIA around the world and gave a lecture at the ICMS annual meeting in 2015; we travelled together and of course as usual he was met as he disembarked and escorted through all those tedious airport formalities, while I joined the queue. He will be greatly missed by many, but motorsport will miss his experience, knowledge and calm approach.
On behalf of all the doctors and emergency workers in motorsport I would like to offer our sincere condolences to Charlie’s family at this difficult time. Rest in Peace Charlie! 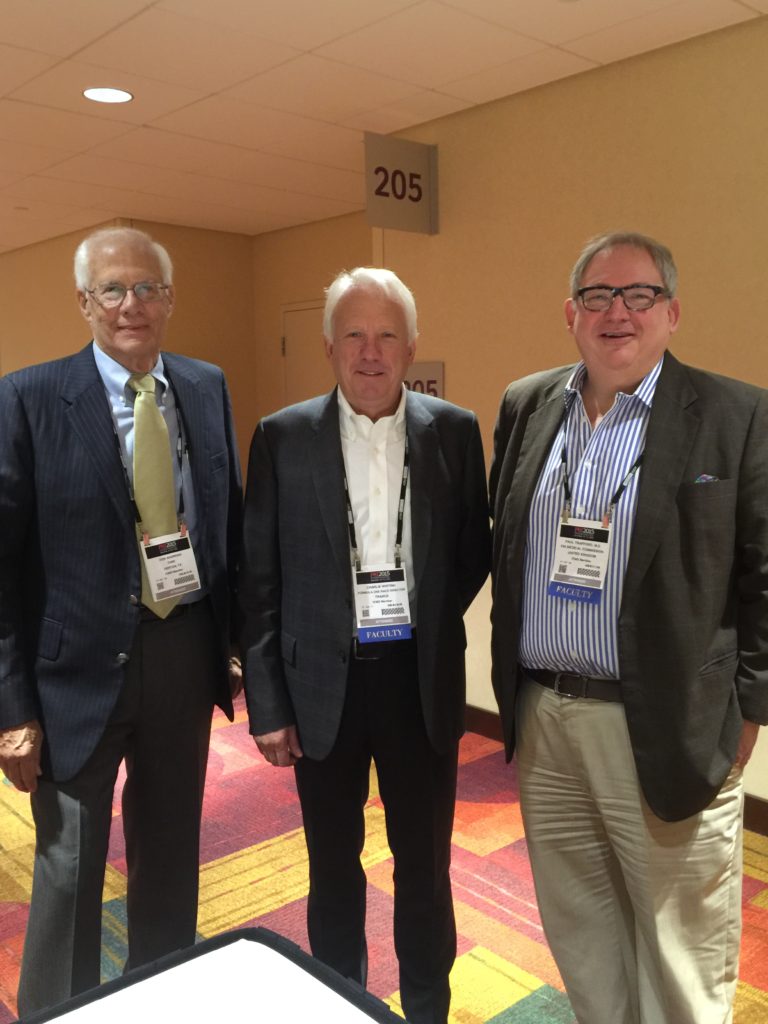